Flux with Us: A Personal Perspective on Benjamin Patterson 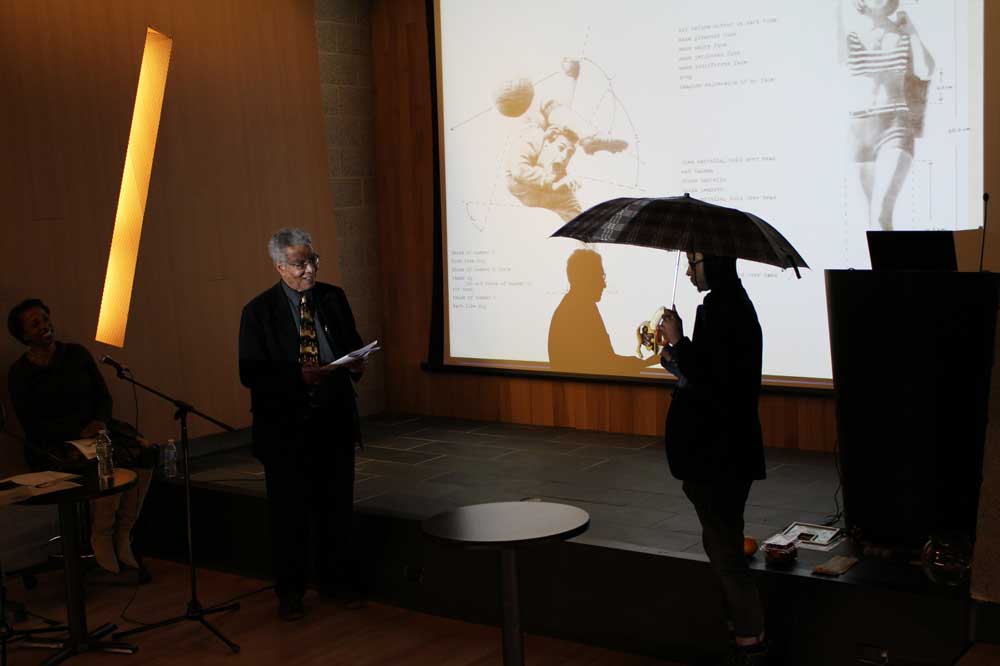 After last week's Benjamin Patterson performance, I asked one of the fearless audience volunteers, Matthew D. Morrison--a Ph.D. Candidate in Historical Musicology at Columbia University--if he would share his experiences performing one of Patterson's scores from Methods and Processes, 1962. Being such a good sport, he said yes, and I am happy to share his reflections with you.

As I stood next to Benjamin Patterson, iconic bassist and (beyond) experimental composer, I knew that I was in for a treat. But standing in front of the stage as I took bite, after bite, after bite, after…(yes) bite of a very filling banana, navel orange, and (thankfully singular) strawberry, the very attentive, supportive, and once fellow audience members somehow receded into the backdrop as I became performer—and Patterson conductor—in a “fruity” parody of an all-too familiar scenario as violinist within an orchestra. “Open Umbrella,” Patterson says…“think beet [beat],” as he continues to conduct. But as he had become conductor—in my mind—and I performer, the food that I was nervously eating stopped being food and became an instrument; I frantically and attentively attempted to follow the directions of the conductor/composer. “Take your time,” Keith Obadike yelled, thankfully, as a teacher or friend would have somehow signaled to me during a recital. But wait, this wasn’t a real performance. I was eating food. And not holding a violin, but an umbrella. I suddenly realized these facts(?), as the strawberry became the coda of the performance. What was the point? I’m not quite sure, but as Liz suggested, I will never think of the word beet or beat the same again. (wait, was that the “.”?).

On Abstraction: Things You Can't Tell Just by Looking at Us